To support the CASEC Medical Mission to Cameroon, and to volunteer or donate to a participant. GO THERE!

You can also contact us directly at: 301-850-2991 or by email to info@patchafoundation.org Thank you!

Her name is Mauritia Patcha. She is a survivor. 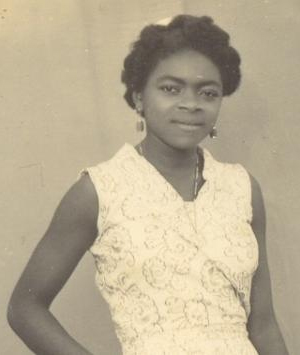 Her father died young and being the first of 7 children, she felt it her duty to help raise and educate her siblings. She was twenty when she married my father and by her 25th birthday she was a widow. In those 5 years she experienced the death of her first born, gave birth to 2 girls and was pregnant with her third. She moved back into her mother’s home and went back to the business of surviving for herself, er siblings, and her children.

She resumed the teaching job she had given up when she started a family. With social services being her first love in career choices, she studied hard, earned the qualifications and rose to rank of Divisional Officer for Social Affairs for Meme and Ndian divisions in Cameroon, West Africa. She realized early on that in order to reach her full potential she needed a college degree.

She had gone to Teachers Training College straight from primary school, without her GCE O’ Levels certificate. So, she studied at home, wrote the General Certificate of Education Ordinary (GCE O’) Levels and passed. With O’ Levels and work experience she applied and was accepted to the University of Wales, Swansea, where she earned a B.Sc. in Social Work and two MS degrees, in Social Work and also in Economics. She was Director of the National Center for the Handicapped in Yaounde, the capital city of Cameroon, before finally retiring from civil service as Provincial Delegate for Social and Women’s Affairs for Littoral province.

Mom has always been careful about her health. Her mother suffered from hypertension and diabetes and she was fully aware of the risks involved. She ate the right foods, exercised routinely, kept her weight down and tested her blood pressure and blood sugar at home regularly. She also had the recommended check ups by her physician. When she felt the tiny lump in her breast it did not alarm her. Even her doctor thought nothing of it but suggested that she have a mammogram anyway. Her last mammogram had been 18 months earlier and was normal.

My Aunt Magdalene and I waited while the lump was excised for a biopsy. The procedure took no more than 15 minutes under local anesthesia. Mom later remarked at how deep the growth had been and how the doctor and nurse were both surprised that a pea size lump could have roots so deep. The physician had to scrape deeper and deeper to get as much of it out as he could. When he came out to meet us he had the specimen in a jar in his hand and I could see just how big the tumor was. I still have this image of a small bud in water just sprouting tiny, long root hairs.

Something in the back of my mind immediately thought the worst and would not let go. Still mom thought nothing of it and went about her business as usual. Cancer did not run in our family and she just wasn’t going to be the first.I immediately went into research mode. I was on the Internet day and night trying to absorb every written word, every experience, and every medical fact about the disease. I spent countless hours trying to size the lump I had seen, using rulers, my fingers, any object available. I shared my suspicions with my sisters and we started making plans for her treatment. We were going to be as proactive and aggressive as possible. She had to beat this disease. Period. I pestered her physician who is a close family friend until he finally confided in me that he would be surprised if it wasn’t cancer. He assured me that he had taken out all that a human eye could see but mom would need chemo or radiation. He was giving us a leg up knowing that we were going to evacuate mom and we needed time to finalize arrangements. Still he cautioned that only a pathology report would be definitive.

Mom’s specimen was transferred from clinic to clinic and lab to lab for various reasons including malfunctioning equipment. Finally we were told that a pathologist in Bamenda had one of the few working equipments. We had to collect the specimen from the Reference Hospital and chauffeur it to Bamenda. Finally the news we had prepared for was confirmed. Ductal Carcinoma in Situ (DCIS). The time from specimen harvest to diagnosis was 10 weeks, much, much longer than the usual. Mom took it in stride. Cancer is NOT going to be a death sentence, she seemed to be demonstrating. With her travel and treatment plans already in place she left 2 days after the news, headed for London and a new life as cancer survivor. With her went a specimen to be tested in London. We wanted a second opinion for obvious reasons.

Mom has since had a lumpectomy and radiation. The biopsy she underwent in Douala had basically been a lumpectomy. The good doctor did take every thing out except for a few end cells that his eyes could not see. Those were scraped off and 10 lymph nodes removed. These tested negative for cancer. She is on a course of Tamoxifen to prevent recurrence.

It’s been a few years since her diagnosis and she is in good health and good spirits. She has been put in difficult situations most of her life and has excelled beyond measure. She has never once expressed doubt, self-pity or lack of faith. Being the consummate social worker she volunteered a few days a week at a retired people’s home as a counselor while she was undergoing treatment. With her assistance and guidance we have set up this foundation as well as a cancer resource center in Douala, Cameroon.

Mom’s cancer diagnosis put a marker on every member of our family. No longer do we take for granted the good health we have or the opportunities for early diagnosis we are blessed with. We belong to that special group of people who must check off “yes” when asked of a family history. And it is asked more often than one realizes e.g at the doctor’s office or filling life or health insurance forms.

We are proud of her and would wish for no other mother but her…cancer and all.

But we know that it would not all be possible but for the grace of God, and so prayer continues to be the cornerstone of the healing process for us.

Stella, summer 2008
Excepted from the book “Cancer is not a death sentence” by Kafain. E. Mbeng

We collect and disseminate health related data, particularly with cancer, malaria and AIDS.

We are working tirelessly to grow our network of information and support services, and we need you.